This month the Group had a talk introduced by John Westrope and given by Chris Clack on “The Harry Ferguson Story”. This generated at lot of interest from within and outside the village. More about this talk below.

The next Group meeting is on Monday February 29th at 7.30pm in the village hall, when a talk on Thornhill Brewery will be given by Henry Marriott. All welcome, entrance fee £3 includes a glass of wine.

Harry Ferguson and his link to Marton (via former resident, Noel Newsome, OBE).

This article is based around a talk given by Chris Clack to the Group in January 2016, together with other sources. With thanks also to John Westrope (ex-Ferguson employee) who help set up the talk and introduced it, and Tim Foden who brought along his Little Grey Fergie tractor.

Harry Ferguson was one of the greatest inventors in the history of tractors and a notable development of his was the 3-point linkage which revolutionised farming and gave improved traction and safety. For those interested in the details of his life and work there are numerous books on the subject and a museum dedicated to him; the latter has a website with his biography, information about his developments and many photos.

Much of the production of Ferguson’s tractors and associated implements was outsourced to various engineering companies over the years. It was one of these deals which brought Ferguson production to this area in 1946, at the Standard Motor Company factory in Banner Lane, Coventry. (Standard later became Standard-Triumph and produced Triumph-branded cars). The Banner Lane factory was one of the many “shadow factories” set up under the instigation of the government in the build-up to World War 2 to provide additional aircraft manufacturing capacity. During the war this factory produced the Bristol Hercules engine which was mainly used to power bomber aircraft.

Noel Newsome, OBE, joined Harry Ferguson Research Ltd in May 1948 as their public relations director, after an illustrious career in journalism and broadcasting. His CV included work for the Daily Telegraph, the Daily Mail and in December 1941 he was appointed to the new post at the BBC of director of European broadcasts . Later, in 1947, he joined the National Coal Board as head of their Public Relations Department.

In 1961, for example, Noel had an article published in the Glasgow Herald about the “Ferguson Formula” applied to a normal family car, including four-wheel drive and equalised breaking.

In the 1960s, Noel moved to Marton with his wife Barbara where they became a core part of the village community for more than a decade. (More about the house in which they lived, “Marton House”, is given in this other article). Barbara was an accomplished artist and organised art festivals in the village. 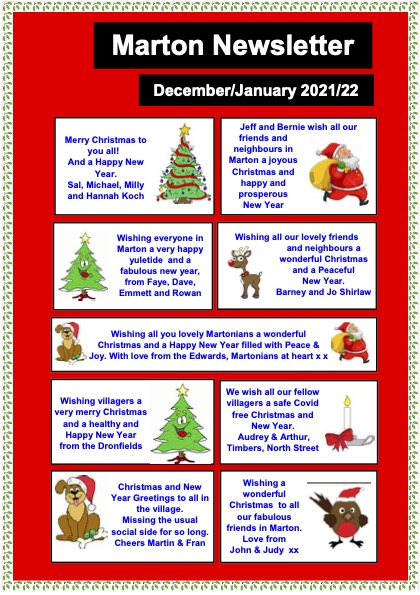